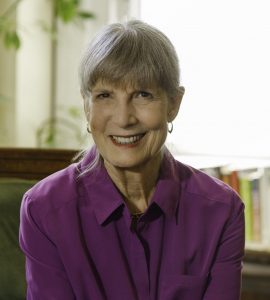 Nancy McWilliams is Visiting Professor Emerita at Rutgers University’s Graduate School of Applied & Professional Psychology and has a private practice in Lambertville, NJ. She is author of Psychoanalytic Diagnosis (1994; rev. ed. 2011), Psychoanalytic Case Formulation (1999), and Psychoanalytic Psychotherapy (2004), all with Guilford Press. She has edited or contributed to several other books, and is Associate Editor of the Psychodynamic Diagnostic Manual (2006, Lingiardi & McWilliams, 2017). She is a former president of the Division of Psychoanalysis (39) of the American Psychological Association and is on the editorial board of Psychoanalytic Psychology. A graduate of the National Psychological Association for Psychoanalysis, Dr. McWilliams is also affiliated with the Center for Psychotherapy and Psychoanalysis of New Jersey. She is on the Board of Trustees of the Austen Riggs Center in Stockbridge, MA.

Awards include the Gradiva prize (1999), the Goethe Scholarship Award (2012), the Rosalee Weiss award for contributions to practice (2004), the Laughlin distinguished teacher award (2007), the Hans Strupp Award for teaching, practice and writing (2014), and the Division 39 Leadership (2005), Scholarship (2012), and International (2020) awards. She has given commencement addresses for the Yale University School of Medicine and the Smith College School for Social Work. The American Psychological Association chose her to represent psychoanalytic therapy in a 2011 remake of the classic film, “Three Approaches to Psychotherapy,” and asked her to be a plenary speaker for the 2015 APA convention in Toronto.

Dr. McWilliams specializes in psychoanalytic psychotherapy and supervision; the relationship between diagnosis and treatment; alternatives to DSM and ICD diagnostic conventions; integration of feminist theory and psychoanalytic knowledge; the application of psychoanalytic understanding to the problems of diverse clinical populations; altruism; narcissism; and trauma and dissociative disorders.